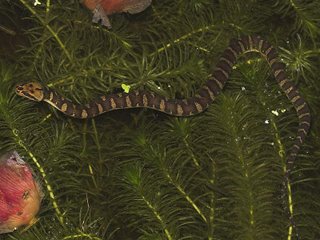 I (together with Ria Tan, Chan Kwok Wai, and Charlene Yeong) visited a freshwater pond in Sungei Buloh Wetland Reserve on 19 May 2006, at about 8 pm, and found that the Puff-faced Water Snakes (Homalopsis buccata) are particularly abundant. They are probably the only other snakes in Singapore, besides the Dog-faced Water Snakes (Cerberus rynchops), to appear in high densities. These nocturnal snakes are more or less confined to freshwater habitats, such as rivers, ponds, and canals (Lim & Lee, 1989; Lim & Lim, 1992; Cox et al., 1998). 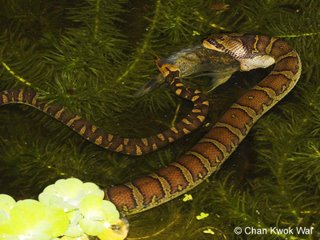 We also witnessed an adult and a juvenile fighting over a prey (Tilapia?)! The tinier one, as expected, lost the tug-of-war. Puff-faced Water Snakes are also known to consume frogs (Cox et al., 1998). Due to their appetite for freshwater fish, these snakes are considered pests in ornamental fish farms (Lim & Lee, 1989; Lim & Lim, 1992).

There are mixed accounts on the temperament of this mildly-venomous species. Lim & Lee (1989) claimed that it has a vicious temper and will bite severely if roughly handled. But according to Lim & Lim (1992), this is one gentle snake! 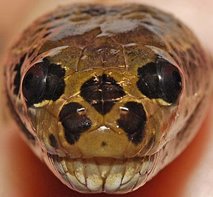 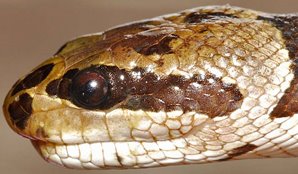 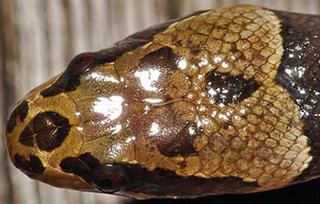 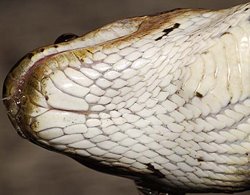 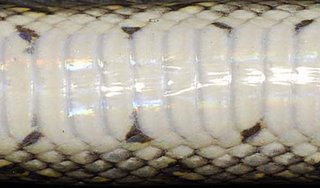 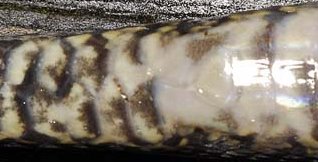 Thanks for the clear info!
I was walking on flipflops at night and bitten in my foot by this species september first 2006 in Surin, Thailand. The snake was about 60cm long, darker colored than on your photos. Nobody at the hospital could identify the snake, of which I had quickly taken 2 digital photos after the bite. 14 hours in hospital later there were still no symptoms of any poison, so I was allowed to leave.
Later I bought 'Snakes and other reptiles of Thailand and south-east asia' (asia books), it was very obvious from the photo on page 42 that this was what bit me.

EVEN by wow gold the standards gold in wow of the worst financial buy wow gold crisis for at least wow gold cheap a generation, the events of Sunday September 14th and the day before were extraordinary. The weekend began with hopes that a deal could be struck,maplestory mesos with or without government backing, to save Lehman Brothers, America''s fourth-largest investment bank.sell wow gold Early Monday buy maplestory mesos morning Lehman maplestory money filed for Chapter 11 bankruptcy protection. It has more than maplestory power leveling $613 billion of debt.Other vulnerable financial giants scrambled maple money to sell themselves or raise enough capital to stave off a similar fate. billig wow gold Merrill Lynch, the third-biggest investment bank, sold itself to Bank of America （BofA）, an erstwhile Lehman suitor,wow power leveling in a $50 billion all-stock deal.wow power leveling American International Group （AIG） brought forward a potentially life-saving overhaul and went maple story powerleveling cap-in-hand to the Federal Reserve. But its shares also slumped on Monday.

Send your sightings to chimck@yahoo.com!

"KNOW, LOVE, SAVE Our Snakes"

Learn how by clicking here

What are the good books on snakes in Singapore? Ans

What to do if I get bitten by a snake? Ans

Are all snakes venomous? Ans

Is it illegal to keep snakes in Singapore? Ans

What happens to the snake if I call 999? Ans

IN SINGAPORE, OTHER ORGANISMS HAVE BLOGS TOO

No. people who slithered here